As I’ve been pulling together thoughts and things for Baby Girl’s nursery, it dawned on me that I never shared Carter’s room.  I LOVE the way his nursery turned out and feel like it captures him perfectly.  I also planned it so that the space would grow with him – I didn’t want to do anything “baby” that I would have to change out in a few years.  Before we even found out he was a boy, I knew the theme for the room would be “airplanes” (if it was a boy).  That’s a no-brainer with having a pilot for a dad and a mom that loves traveling.  My biggest dilemma was that we were smack dab in the middle of moving while I was pregnant.  We ended up moving into our home when I was 8.5 months pregnant so I was on hold for the majority of my pregnancy in terms of getting his room ready.  In hindsight, he didn’t start sleeping in there until he was about 5 months, but still, I wanted the room done!  I also knew I wanted to have newborn pictures in his room so it was important to me that everything be in place, and ready, for his arrival.

I ended up having to pick the paint color before we moved into the house which was tricky.  I spent a lot of time on Pinterest to help narrow down the color choices and ended up going with Aleutian 6241 from Sherwin Williams in an eggshell finish.  The color turned out spot on to the swatch and sample – rare that that happens!  I did his bedroom and attached bath in the same color. 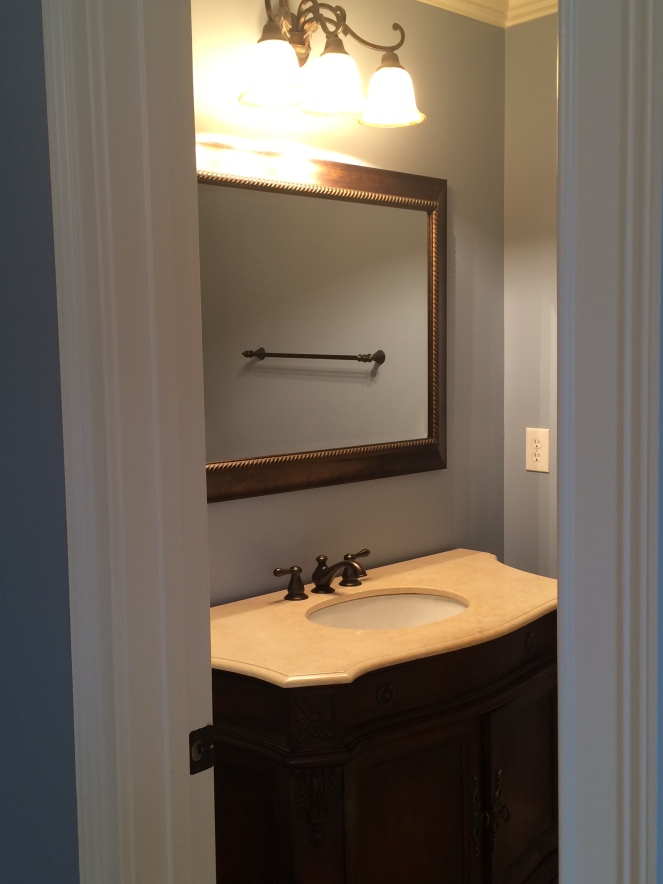 The other overhaul in his room was to change out the standard wire shelf with a custom Elfa closet from The Container Store.  This was another tricky thing to pull off because I ordered all the pieces before we actually moved into the house.  When I was at the house for the inspection prior to move in, I ran up and did a quick measure of the closet and then took advantage of the Elfa sale that was going on to get everything I thought I would need.  Luckily, it all worked out!  As I’ve been changing out the closets in the house, something I’ve done, is make sure to order the standard size shelves so that I can switch shelves/drawers/etc between each of the closet systems if I ever want to change things up.  For example, the bottom 3 rows of shelves in the closet are actually 2 – 24″ shelves on each row so that I can make more long hanging, change the height of certain shelves, remove them completely, etc.  I also really like the over the door racks for little odds and ends.  This is the same product I have on our pantry door.

Let’s move on to furniture – ironically, I ordered Carter’s furniture during a Black Friday sale several months before his due date.  I knew I wanted a crib that converted to a queen size headboard/bed and that was tricky to find.  I went to a baby store in Chattanooga and found exactly what I was looking for!  The color, size, everything was perfect.  They were also nice enough to hold the furniture for me until we got moved into our house – several months later.  I got the crib, toddler conversion kit, nightstand, dresser and chest.

Then, it was finally time to decorate and finish off the long-awaited nursery!

True story – these airplane bins were one of the first things I bought when I found out we were expecting.  I found them at Home Goods and it seemed like a sign that we were having a boy!  It was a risk buying them because it would have been past the return window when we found out the gender.  All worked out and they go perfect in his room!

The Rhodesian Ridgeback stuffed animal was a gift from Adam’s brother as a nod to our Ridgeback pup, Henderson. 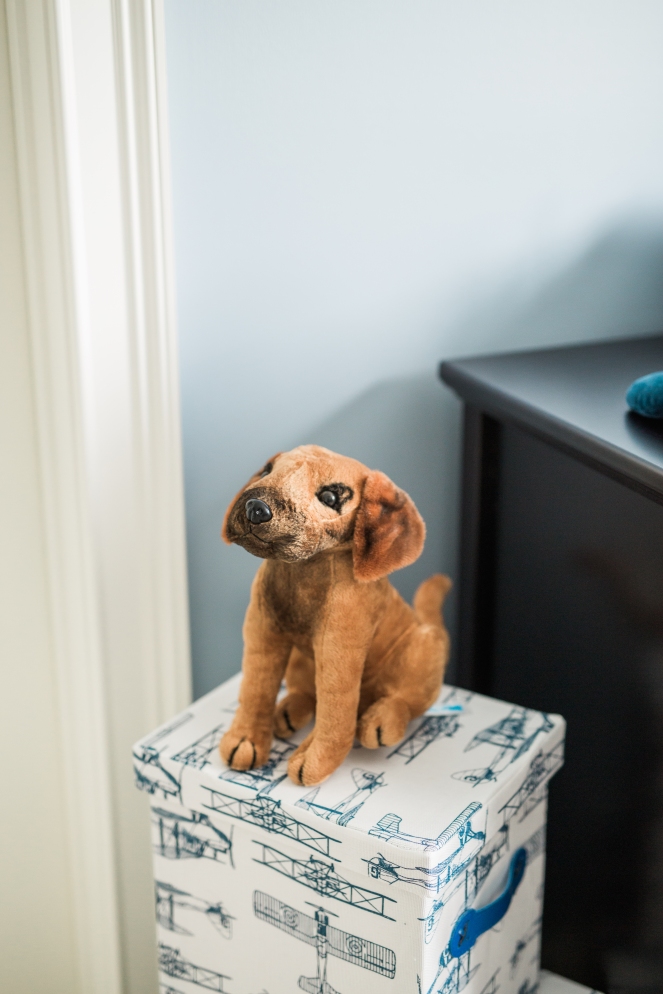 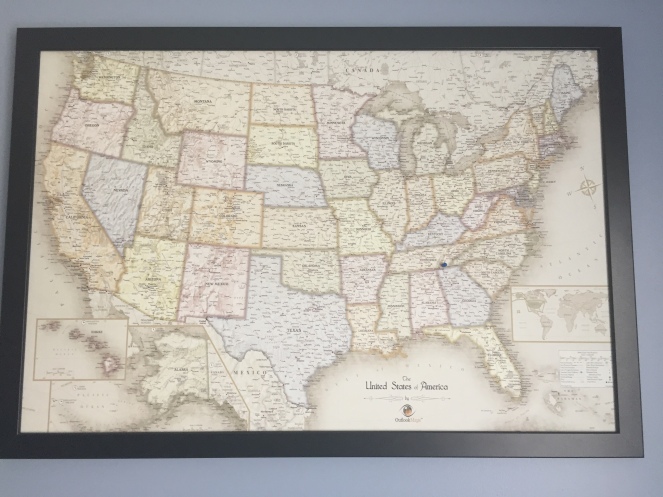 I have LOVED adding pins to the map as we are able to take Carter on adventures.  It will be fun when he’s old enough to understand the connection between trips and where he’s been on the maps.

Airplane lamp is from Target but no longer available.  I also have switched the shade to a white one since this picture was taken. 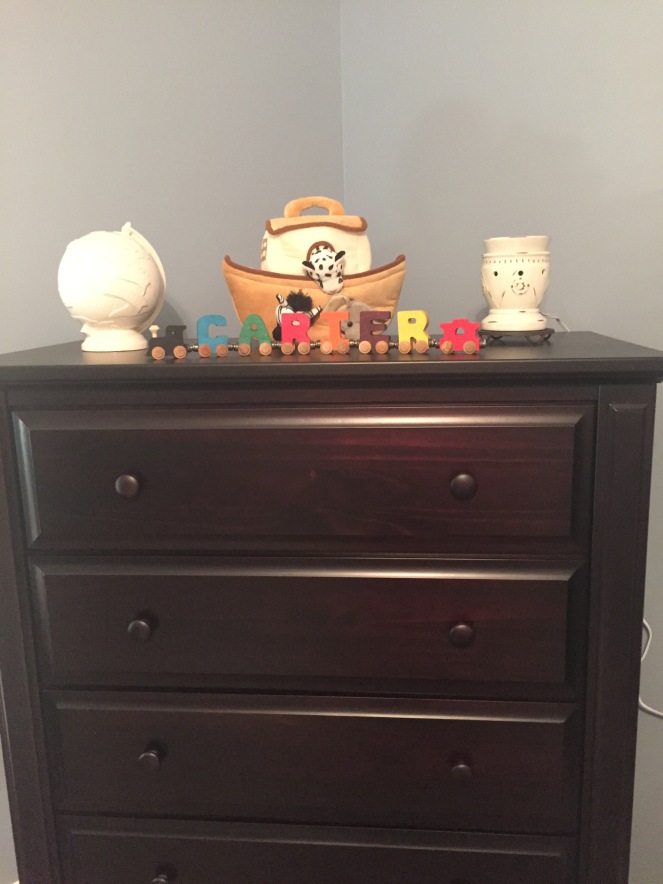 The items on his dresser/nightstands/changing table get changed around quite often.  This was what was on there at the time we were getting moved in:

Ceramic Money Bank from Hallmark but no longer available 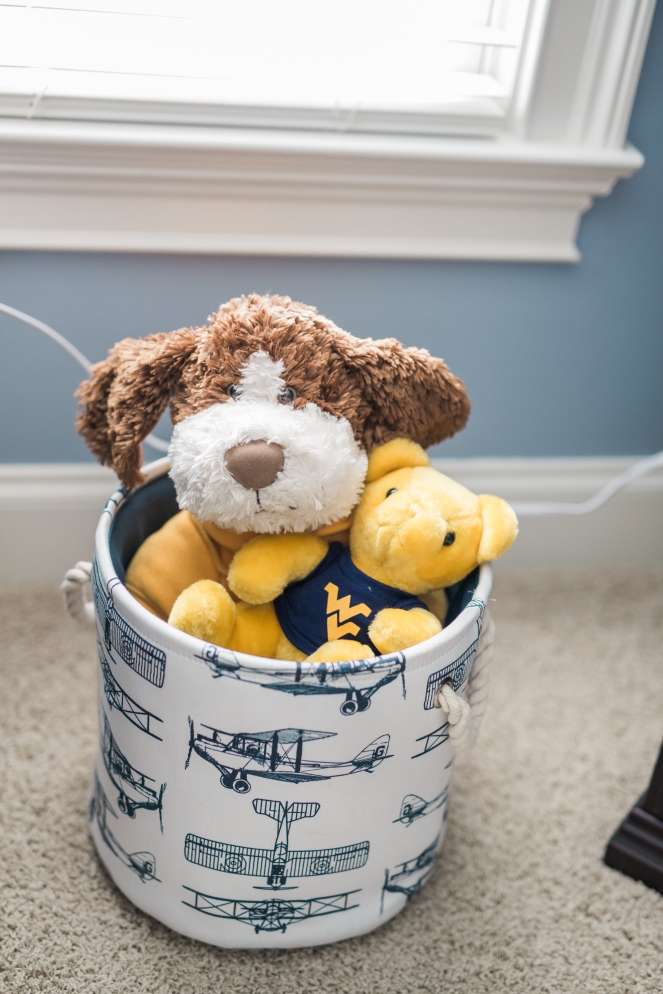 His room has pretty much stayed the same over the last 21 months.  We have since installed the baby camera on the wall above the crib (he started throwing it off the foot board when he was around 16 months.  We also brought up the glider and ottoman from our master bedroom once he started sleeping in his room, probably around 4 – 5 months old.